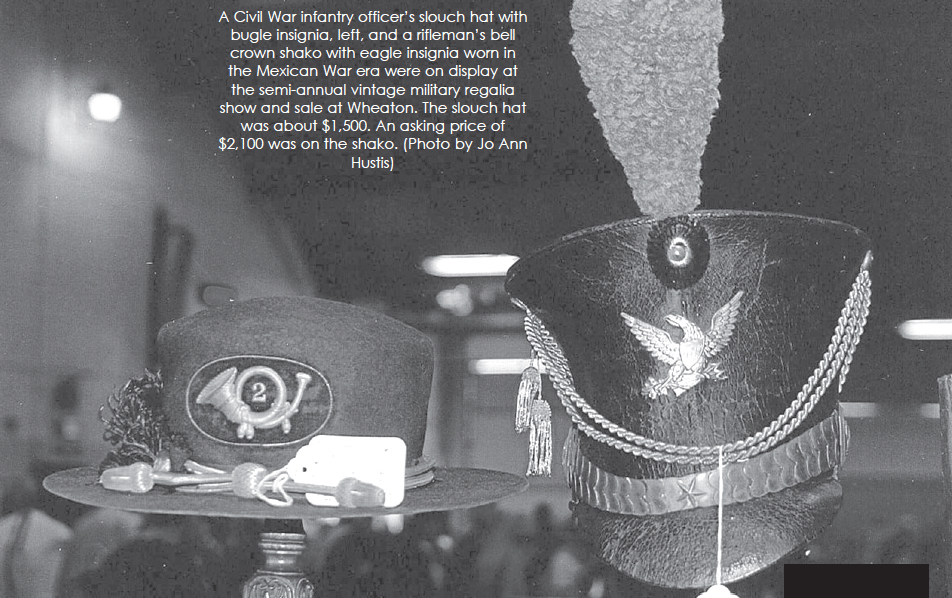 He was offering a bell crown shako (tar bucket hat) for $2,100. “Depending on their condition, branch of service and insignia, they range anywhere from about $1,800 to $3,000,” Millikan said. “This was for a rifleman, dates from about 1820 to 1840, and was worn before and during the Mexican War. The green pom-pom on it states that it’s a rifleman’s hat.” A similar shako with some wear and missing part of the eagle badge was listed on the Internet at $4,500.

Colors tell much about military uniforms and hats, the Three Rivers, Mich., resident said. A uniform trimmed in red denotes artillery, yellow identifies cavalry, pale blue singles out infantry, and green marks riflemen. Rifles were expensive to manufacture at that time. This meant there would be just a small company of riflemen in an exclusive marksman’s group.

Millikan’s display also included an officer’s slouch hat with bugle infantry insignia, which was worn during the Civil War. After the conflict ended, the infantry insignia was changed to the more familiar crossed rifles.

Available at $3,275 was a unique hat known as a kepi, which most often is associated with the Civil War era and into the Indian wars. The kepi was 2nd Division 5th Corps. Officers were generally issued kepis for fatigue use. An enlisted man’s kepi with bugle badge signified the infantry. Each of the 224 Corps in the Union Army had their own symbol. Red denoted the 1st Infantry Division, white the 2nd Infantry Division, and blue the 3rd Infantry Division.

“A soldier would know at a glance what Corps and Division another guy was in,” Millikan said. Another officer’s kepi was identified by the name inside as having belonged to Capt. John E. Ransom of the 1st Buffalo Regiment of Buffalo, N.Y. Because the kepi is identified, it also was priced at $3,275. “It’s worth it because we know who wore it,” Millikan said.

Hat prices depend on their condition and insignia, which give some clue about the rank of the wearer. “An enlisted man’s hat is worth about $1,500, and an officer’s hat – which is a very special kind of hat – might be $10, 000,” he said. “Hat prices are crazy.”

A child’s incredible full military uniform in the booth of Scott Ferris of Arcadia, Fla., fascinated visitors to the show and sale. Displayed on the manikin of a 3- to 4-year-old boy, the Zouaves uniform was that of the 5th New York Volunteer Infantry of 1861 and consisted of a distinctive jacket, vest, sash, baggy trousers and fez. Ferris acquired the uniform from the owner, who had brought it to his shop, J&R Ferris Antiques in Arcadia.

“It’s the kind of uniform worn by a child just for entertainment purposes because he would be too young to be a drummer boy,” Ferris said. “Everything came with it, including the boots. It’s rare to find the full uniform. This does have some wear and soiling, but it’s really quite sharp for the age on it.” The uniform could be had at $1,150.

An enlisted man’s Civil War artillery shell jacket at $2,200 drew many visitors to the booth of dealer R.J. Parks of Macomb, Mich. “It’s all complete,” he said of the size 2 garment. “It does have some moth holes showing its age, and the red piping is for artillery. You’d see yellow piping on a cavalry jacket. Articles like these come from the families, museums and other collectors – a little bit of everywhere.”

Wayne Jorgenson of Eden Prairie, Minn., a writer and published author, offered the uniform coat of Maj. Gen. Henry Slocum at $8,000. With it, the buyer would receive the notarized papers of the coat’s former owners. The general’s granddaughter had originally given the coat, which he wore as a colonel with the New York Regiment, to the Chicago Historical Society, and it had passed through several owners since. “

The coat would have been worn at Bull Run, but Slocum was promoted that August to major general, which meant he would no longer wear that uniform,” Jorgenson said. “He commanded the left wing of Gen. Sherman’s army in Sherman’s March to the Sea. You can see several layers of sweat inside the coat. It’s very soiled, very worn, but definitely his. It did not have shoulder straps when it came to the Society, and it’s missing a few buttons, so it’s as exact today as when the CHS received it. It’s been in my collection over 30 years, and I finally decided to part with it.”

A husband-wife couple sold eight vintage military uniforms from their well stocked booth to a single customer about 90 minutes after the show opened. “Those were uniforms from the Spanish- American War and other conflicts,” the husband said. “It was an incredible collection for a person to get at one time.”

The couple said they were refusing identification, which included their community and state, because of concern about break-ins, hold-ups and robbery. The highlight of their display at the Civil Was show was a 33-star flag of the United States in a wooden presentation case at $4,500. Flags of its size typically flew over large government offices or headquarters. This flag was flown under Presidents James Buchanan and Abraham Lincoln, but the history has been lost as to the locations where it actually was flown.

“We were in Massachusetts when a fellow from Pennsylvania came up (to us) and said this flag had been in his family forever,” the husband noted. “When it’s really historical like this, we often try to talk them into keeping it. In this case, we purchased it.” He didn’t explain why.